The Power to Co-operate by Jill Sawers 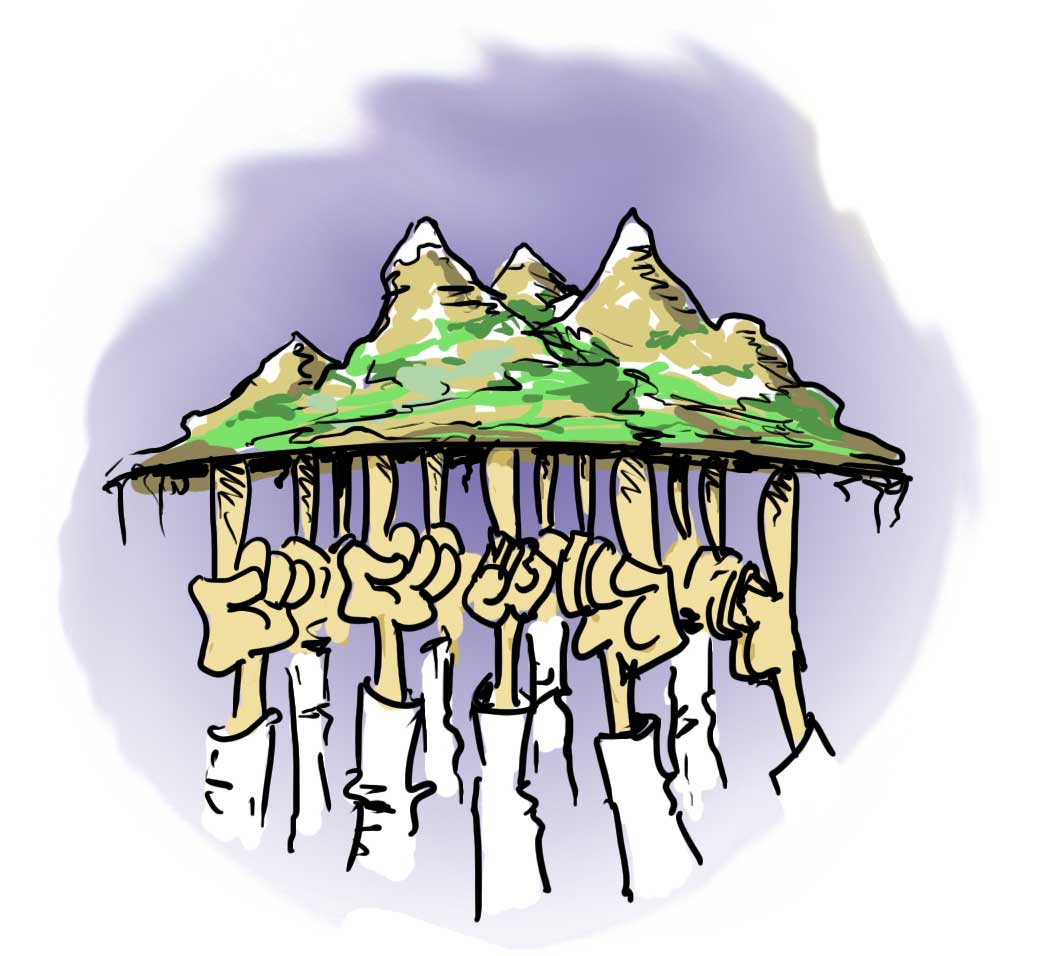 “Independence? That's middle class blasphemy. We are all dependent on one another, every soul of us on earth.” - George Bernard Shaw

A perfect partnership is said to be not two people gazing into each other’s eyes, but rather standing side by side looking in the same direction.  This suggests that relationships don’t exist merely for their own sake, to keep just the people involved happy; but rather relationships exist for a high purpose. The synergy created by this co-operation contributes to the larger good in ways simply not possible by any individual.   When the going gets tough in any relationship (whether couple, family or group), acknowledging our higher purpose for being together, can help us to rise above petty differences.  Like everything in nature, we humans also exist in a circle of life.  It is said, no man is an island.

Co-operation is the way of the natural world.  Everything in nature contributes to the survival of the other. Through giving the cycle is kept going, and in return there is the reward of its own growth.  The nature of nature is to serve without expectation, moving with the invisible will of seasons, sun and moon.  We are also prompted by our inner selves, moving by invisible hands to join the circle of life – to give, involve, share, serve, contribute, cooperate – so that we may also grow and flourish.  But unlike nature, we have personal, individual minds and egos.  Unlike nature, we can create egocentric stories and meanings about what is going on; stories such as: ‘I always give and never get’, ‘no one appreciates how much I do’, ‘let me stop giving, and see how much they’ll miss me’!  Can you imagine a tree, flower, vegetable, plant or animal indulging in such self-pity?

The Emperor Penguins in the Antarctic are a perfect example of co-operation.  The mothers leave the fathers with the eggs, and go off for months in search of food. The fathers then huddle closely together in the fiercest weather on the planet, taking turns at being on the outside of the circle. In early spring the mothers return with food.  I’m pretty certain that at no time during this grueling scenario do the fathers complain to each other about the women being off enjoying their fish feast, whilst they suffer on the iceberg.  I’m sure the women don’t complain about the hard work catching fish.  And I’m certain they don’t look at their fledging, and ask, was it worth the hassle?  Animals feel pain, they also respond to energy, to love and peace, but they don’t suffer in the way we suffer, because they don’t have ego.  They don’t think of themselves as separate beings, more special or worthy than the other.   They may compete with each other for food or mates, but this is instinctive and not the result of a thought process.  So the male that loses the fight and therefore the chance to breed that season, doesn’t consequently suffer from low self-esteem, or feelings of hopelessness and frustration.  Nature doesn’t waste its precious energy on useless thoughts.

We, however, complicate the whole process with the story of ‘I’.  Like all of nature, our true nature is to co-operate, to be part of something bigger than ourselves. Many people list working on a team or a project that helped others as one of the major highlights of their lives.  In times of crisis and disaster, faced with the urgent needs of others, people forget themselves.  They experience joy and aliveness in the forgetting.  However as Chekov said, “Any idiot can handle a crisis. It’s the day-to-day living that wears you down”.  It’s in the day-to-day living that we forget the joy of selfless giving and loving and start questioning if we are getting enough.   Did ‘I’ get enough respect, attention, awards and rewards, love, money, position, privilege, acknowledgement?   If it isn’t enough, my ego will tell me it’s not worth doing.   The simple thought ‘no one noticed me’ can cause enough pain to the ego, that the ego will dictate that I withdraw my cooperation, as a way of punishing those who take me for granted.  I don’t realize at that moment that by holding back from sharing my love, resources, time, knowledge, talents, I am the one who loses the most.  If you don’t use it, you lose it.  And if you don’t give you simply cannot receive.

In order to be co-operative, we need to be truly humble.  Most of us learn false humility as part of being well socialized.  When we are praised for something we modestly reply, ‘Oh, it was nothing, I couldn’t have done it without help’.  But inside, a little rush of adrenalin, a little blush of the cheek speaks the truth, ‘Yes, indeed, didn’t I do well!’  Real humility comes from a deep recognition of the interconnectedness of everything; that each moment of my existence is supported by infinite factors.  As I write these words now, merged into this moment, are hundreds of people who have taught me, fed me. The seat I’m sitting on, the computer I use, the lights in the room have all been provided through the co-operation of many.  Even the air I breathe and the food nourishing my cells, the pumping of blood to my brain, all this depend on countless biological wonders.  And to think all of this happens with absolutely no thanks from myself - yet, for my small part in this huge picture, I demand to be acknowledged.  This need for my small drop to be recognized as separate and more deserving than the ocean of which it is a part, actually takes me out of the flow of life.

When I truly include myself as part of the big picture, the big picture will include me also.  When I stop striving to fulfill my personal limited desires; when I request with sincerity, ‘to be an instrument for thy peace’, I invite the co-operation of high powers.  God, the Universe, providence – whatever word we use for it – is there when I quiet the sound of the ego and discover a simpler, humbler happiness. George Bernard Shaw puts it so wonderfully: “This is the true joy of life, the being used up for a purpose recognized by yourself as a mighty one; being a force of nature instead of a feverish, selfish little clot of ailments and grievances, complaining that the world will not devote itself to making you happy. I am of the opinion that my life belongs to the community, and as long as I live, it is my privilege to do for it what I can.”

This awareness of the interconnectedness of everything, especially on the level of thoughts, is known as the Universe Mind - a theory put forward by such scientists as Rupert Sheldrake.  In the simplest terms, ‘universe mind’ is the idea that at the level of the unconscious, we are not separate but linked like one vast mind.  So anything happening to one has an influence on the whole.  Many people have heard of the 100th monkey phenomena where Monkeys on separate islands were given potatoes.  As soon as one group started to clean the potatoes in water, the other monkeys picked up and copied the idea.   The more an action is performed, the more likely others will tune into the pattern.  This is used to explain many of the previous unexplainable events in nature, such as why turtles leaving their beach as hatchlings, know the exact time and spot to return to lay their eggs when they are mature.  This is the same phenomenon that may explain why scientists in different parts of the world, completely unaware of each other’s work, make the same discoveries, conclusions or inventions at approximately the same time.

The implication for us at the daily level is that nothing we do, even in supposed isolation, is really an isolated event.  It affects the whole.  Any action performed repeatedly forms a habit in the universe mind, making it easier for others to move in that direction.  We don’t realize that the thoughts we are having, are being indirectly influenced by millions of others, and that we are also influencing millions of others.  This means that as we stand in front of the refrigerator trying to decide whether we will indulge our taste buds or honour our health, we are deciding for the world.  Our defeat or victory, in terms of living our truth, indirectly empowers or disempowers others to do the same.  From my point of view, this effect seems to be more powerful on people who are more directly connected to us.  When we make an upward shift in our consciousness, it seems everyone around us does the same.  It is not certain who affects whom first; but, in terms of co-operation, this has a profound implication.  Co-operation is not only pitching in and doing your bit in the team, on the project or in the family.  Co-operation is a moment to moment striving to be and do your best, knowing that this is the most merciful, charitable thing you can do for your fellow human beings.

In his book about a fictional spiritual community in Peru – the Celestine Prophecy, the author describes how meetings were held.  While each member is speaking, the rest of the group concentrates on sending positive energy to that person.  They understood that this energy helped the speaker to be centred in his or her highest self, so that whatever is expressed is of the highest truth, and therefore naturally in harmony with the needs of the whole.  Contrast this to meetings where everyone is stuck on the level of their own ideas – defending and attacking the ideas of others.

The ego may on some level dislike the idea of co-operation and the surrendering of the personal will that it requires.  But if we can gently direct our consciousness to drop below the level of the mind’s chatter – the ego’s analysis and judgment – to the level of our innate wisdom and even deeper to the level of stillness – beyond words and ideas of ‘yours’ and ‘mind’ – we may discover that co-operation is not about losing. Rather it is about gaining access to the vastness of our own being, and the divine complexity of this universe of which we are part.